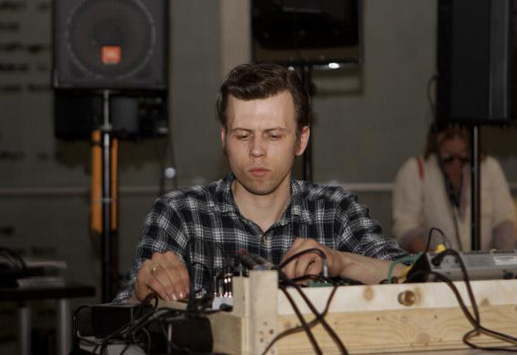 Auxpan, also known as Elvar Már Kjartansson, is Based in Reykjavík and Seyðisfjörður, Iceland. He has been working with electronic music for over ten years as Auxpan and has participated in numerous projects as such. He makes music where sound bytes, rhythmic patterns, field recordings and words come together to form an experimental DIY sound. Part crunching electronica, part soothing ambient. He is a founding member of Skálar, center for sound art and experimental music, in Seyðisfjörður. This young sound-crafter with knack for creating self developed original apparatuses, is not so interested in the music itself but much more in what kind of sounds it is possible to make using his machines. Even his name is a derivative of his tinkering talent – it is programme: Aux(iliary) Pan(el). Auxpan has been building quite a reputation for himself in diving stages on the international festival scene.